How to Make Your Own Explainer Video Perhaps you’ve noticed that your business partners or competitors have been updating their YouTube channels or posting new videos on their websites. It seems that everyone with a camera and basic video editing software is making videos for their business these days, and there’s a good reason for that. Business explainer videos have grown more popular as marketing research has revealed that:

Videos are rapidly becoming the online buyer’s communication channel of choice, and if you haven’t already started making explainer videos for your site, it’s time to do so.

It’s relatively easy to make professional-looking business videos, even if you don’t have a state-of-the-art camera or an Academy Award-winning director. Here are the basics for putting together an explainer video.

Think back to a movie you saw recently that you didn’t like. What was wrong with it? Did you think that the plot was too convoluted? Were the special effects great while the dialogue was cringe-worthy? Was the movie just trying to fit too much into its running time?

Don’t make those mistakes when writing the script for your company’s explainer video. Rather, focus on one problem that your viewer has that your product can solve. Even if you think your product has lots of potential uses, focus on the main one rather than trying to be all things to all people.

As far as running time goes, there’s no magic formula. Your explainer video should be as long as it needs to be to get your point across, but it shouldn’t have lots of unnecessary filler or sections where a viewer is likely to lose interest. Have a few people read over your script to make sure the pacing seems good.

You don’t need to invest in the highest-end equipment on the market to create a professional-looking video. Consider buying or renting a DSLR camera, which is designed for taking still photos, but also works well for shooting videos. One of the nice things about these cameras is that you can easily switch out the lenses, so if you need a zoom lens for one shot but a prime lens for the next, you’ll be able to quickly trade them out.

One of the most important things to remember while filming is that “We’ll fix it in post” is not a catch-all solution. Make your video look as good as possible while filming it—watch out for bad lighting that will make the video look over- or underexposed—and avoid filming in spaces with lots of distracting background noises.

You should also shoot both A-roll (primary footage) and B-roll (secondary footage). Your A-roll might be footage of an interview or spokesperson while your B-roll might be footage of workers making your product or customers using your product. You’ll be able to alternate between A-roll and B-roll in post-production to add interest to the video and edit your interview without any awkward jumps.

You’ll need to choose a suite of editing programs, such as Adobe’s Creative Suite, which provides After Effects, Photoshop, Illustrator, and Audition. After Effects is a great video editing program, while Audition is helpful for editing audio and reducing unwanted background noise. If you want to try out the Adobe Suite, they offer a free 30-day trial.

From there, it’s up to you to decide how to edit your video to make it flow well. While video editing programs can have a steep learning curve, there are plenty of tutorials online, and you’ll get the hang of it in no time. 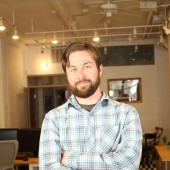 Matthew Zajechowski is an outreach manager for Digital Third Coast.