Tell Me a Story: The Relationship Between Analytics and Storytelling There’s a lot of data out there. Tons of it. In fact, we add 2.5 quintillion bytes of data to the collective total each and every day. Social media posts, digital photos, pedometer counts, automobile diagnostics, weather patterns and tracking, airline schedules, blog posts, email letters, instant messaging, health monitors, sales records, contact lists…it never ends. We throw so much on the metaphorical pile in the modern world that 90% of the data in existence has been created in only the previous TWO years.

Stop and think about that. 90% of all data. In only two years. The 5000 years before that accounts for only 10%. Now, consider how much more we’ll have two years down the road.

It’s a virtual avalanche of analytics. A tidal wave of numbers, statistics, images, graphs, charts, and letters. It’s more than enough to leave you feeling buried by it. We face a relentless barrage of data at every turn.

Much of it is useful. But how to best deliver that data so it’s easily (or at least easier) understood? Stories.

As Old as Humanity Itself

We’re hardwired for stories. A storytelling tradition is present in every culture and civilization throughout history, even as far back as our primitive ancestors. Cave paintings from 35,000 years ago tell the story of hunting parties, gatherings, and the people and animals that made up the world of its tellers. The monumental concepts in our lives – from religion to morality and values – are introduced via storytelling.

Stories help us to remember and understand better than simple data. And no where is that more important than the modern world and its onslaught of data accumulation.

Analytics (the systematic analysis of data and statistics) are an important part of business. We collect, analyze, and use data on everything from sales, promotions, communication, costs, website visitors, clickthroughs, and conversions. It’s a series of numbers, and percentages, and dollars.

Presented as such, it doesn’t hold much meaning for us, and loses even more of its impact on people further away from the source. We rarely, if ever, remember and grasp bare bullet points or computational facts and figures.

Instead, innovative companies are embracing the idea of storytelling with analytics. Of presenting the data to their employees, shareholders, partners, stakeholders, and customers within a story framework that appeals to the way we think and process information.

Data is the what. Stories are the why and how.

One without the other is incomplete. It’s a half-truth. A fragment. If you truly want your audience to understand and act on your data, you should be using stories to explain it to them

A Story Told is a Story Remembered

There’s a lot of research on this phenomenon. And while there’s a great deal of data available on the subject (the best of which is shared via storytelling, of course), the fundamental principle is straightforward: A story framework uses a basic beginning-middle-end design. First this happened, then this, and finally that. It’s a simple cause and effect structure. It guides the listener/reader through the relevant information in a way that appeals to our brain.

Humans learn and think in cause-and-effect relationships. Presenting data in this way allows us to grasp, comprehend, and remember it.

Even better, brain imaging reveals that listening to a story “lights up” various parts of our brain that would be involved if we were experiencing something first-hand. Bare data alone activates just our language processing core. Princeton’s Uri Hasson has shown that telling stories is the only way to trigger those parts of a listener’s brain that actually turn the data into their own idea and experience. We buy into it, believe it, and internalize it with greater ease.

The ramifications for business and not-for-profit organizations are clear: stories generate greater persuasion and connection than facts and figures alone. It you need to convince, persuade, or explain, stories should take center stage. 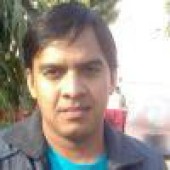 Shyam Bhardwaj is the VP of marketing at Calgary SEO Company. He runs day-to-day operations of content and growth marketing for SMBs. He frequently writes about start-ups marketing, social media and SEO.