A Look at the Evolution of Digital Marketing Remember when there were no cell phones? Or before the internet? Back in the days when we all had to rely on the morning newspaper to skim through to know what was happening around us and the other side of the world. Or perhaps the subscription to some of your favorite magazines, such as Reader’s Digest, to keep abreast of what other people want to talk about? Well, yeah…it’s hard to imagine, right? Who knew that things would take such a drastic turn and we’d all be glued to the internet and our computer screens for the better part of our waking lives? But we have and barely move away from those addictive screens now.

The Beginning of Online Marketing

Businesses have leveraged the power of the World Wide Web; the way marketing has played out on this playing field is fascinating to say the least. Harking back to the times when email was the most preferred mode of communication and took the corporate offices under its aegis. It was a complete game-changer. Then came about the small non-intrusive ads just next to the emails (think about the ads that are shown in Gmail, for instance). Times were changing; the digital space needed to keep up with the constant demand of newer forms of marketing strategies.

All of these so-called nifty marketing ideas couldn’t live up to what was coming next. And then social media happened. It was as though the world finally opened up but felt really small and connected at the same time. Digital marketing took a new meaning and businesses of all sizes scrambled about to get themselves onboard. Take for instance, Facebook. Unarguably the biggest social media platform there is today with over 2 billion people using it. It truly represents the pinnacle of the power that is the internet and what it can do.

Started in a dorm room in 2003, this giant social network was nowhere near as sophisticated as it is now. Facebook initially started off as Facemash. It was a kind-of sketchy platform where student photos were displayed for strangers to gauge attractiveness. Needless to say, the site was closed down by the university. But that gave the impetus to start what is now the biggest social media giant – Facebook.

Initially for the early users of Facebook, it was just a networking site where users could upload their photos and tag their friends. Bear in mind that this was when the platform was still not available for general public. It was in 2006 that Facebook let anyone with an email address create an account. That brought in a surge of users eventually hitting 100 million by the year 2008.

The platform – like every other – evolved over a period of time to accommodate the growing needs of the consumers. As a millennial, we can barely imagine a world without Facebook marketing! But looking back at the digital landscape, in 2007 Facebook launched their advertising system (known as Social Ads). Heck, even the ever ubiquitous ‘Like’ was not invented till 2009! Ah, strange times we lived back then! And once, it came into our being, we started liking photos shared by our friends, neighbors and even aunts we hardly meet.

Speaking of photos, Instagram cannot be left far behind. Debuted in the year 2010, it quickly became one of the biggest photo sharing apps ever. With over a billion users under its belt, it is the most engaged platform after Facebook. The rising popularity of the app led to Facebook acquiring it in 2009.

Then came a host of features on this snappy app, the most popular ones being Insta stories where content creator can post images or videos that’ll remain available for 24 hours. This became an instant hit with content creators and consumers alike and the feature has now evolved to include countdown timers (one of my favorites), QnA, GIFs and more. This is especially helpful for business owners who use Instagram heavily for their marketing purposes. These features help create urgency around a certain product or service; or even help gathering more information from their audiences to gauge how the business is performing and generally amping up the engagement levels of their audiences.

In a similar vein, video sharing has its own journey and has gathered enormous momentum over a period of time. Of course, YouTube remains the undisputed king of video streaming services, however that did not deter other entrants in the industry. Vine, for example, had a promising start for viewers who were interested in watching short videos. They seemed almost perfect for quick viewing at just 6 seconds, however the craze did not last long. It was a few years later that the platform saw its closure. But then, a new social app was born and we have TikTok now that is taking the internet by storm. It has a huge fan following and more than 500 million users on its platform. Although the quality of the content remains a question up for debate, it is without a doubt one of the most influential digital media platform.

What remains at the core of all these social media apps and platforms, is the ability to not only distribute content but also give rise and stupendous popularity to content creators. Influencer marketing was a term not many knew about earlier. Albeit with the constant churning of great quality content by people, content creators quickly attained a level of mini-stardom. Influencers were born over-night and till date remain one of the hottest properties on social media wielding a lot of social clout. All of this would not have been possible with the way digital marketing has grown from its humble beginning to adapting to newer forms of engagement and features.

Digital marketing has come a long way. Just when we think that we’ve seen it all, there’s always something new around the corner to surprise us. All we can do is to sit back and watch this digital landscape evolve in an endless pursuit to bask in its glory. 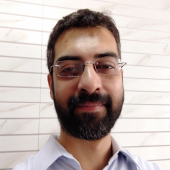 Noman is the founder of WP Adventure – a web design and digital advertising agency in Mumbai, India. He likes to devise ways to help other businesses succeed and loves writing about business, web design, SEO and social media. Though he writes in English, sarcasm really is his first language!